MARBELLA OLD TOWN, TYPE OF BUILDINGS AND STYLE OF THE FACADES

MARBELLA OLD TOWN, TYPE OF BUILDINGS AND STYLE OF THE FACADES 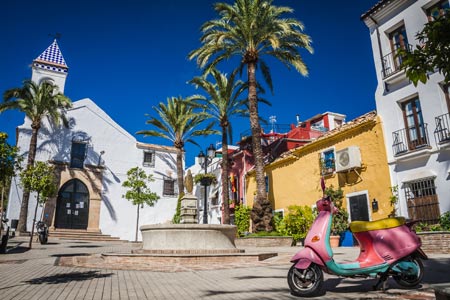 The oldest part of Marbella is a real find. It’s a labyrinth of pedestrian streets that are laid with red tiles and crazy paving. The buildings are all whitewashed and topped with terracotta roofs, and many dates back to the Renaissance. Some are wrapped in bougainvillea; in fact, the whole area is bright with flowers.

The houses are all arranged on corridor-like streets that emerge on little squares like Plaza de Los Naranjos (The Orange Square), where the restaurants place their seating in a small formal garden bordered by orange trees. The old quarter is also kept spotlessly clean, to the point where the tiles shine in the sun. Marbella Old Town comprises two historical quarters – Barrio Alto and Barrio Nuevo, and most of it still preserves its original layout that dates back to the 16th century, when the city was still under Arab rule. Nowadays, the tiny, winding paths of the Casco Antiguo (Old Town) meander their way past glistening white Andalusian buildings adorned with small flower-filled balconies, chic boutiques, and trendy cafes. Marbella old town is filled with the Andalusian character on all sides.

The Alcazaba is one of the historical elements that can still be enjoyed in Marbella. This construction shows different architectural elements that include Roman traces. As all fortifications, it was used as a defensive means until the Christian Reconquest, when it became an important coastal watchpoint. Some of the towers that are preserved in the fortress walls were given names like Torre del Homenaje (Tower of Tribute), Torre Blanca (White Tower), Torre de la Campana (Bell Tower), Torre de la Puerta de Hierro (Tower of the Iron Gate), etc. Some other iconic buildings which show the variety and richness of architecture in Marbella Old Town are:

The Arab Castle is located a short distance from Plaza de Los Naranjos and from the Church of the Incarnation. It is a Muslim construction that was erected by Abderraman III, and of what is currently visible, two towers and the College of Our Lady of Carmen today stand where the arms yard was. It has also been a Site of Cultural Interest since 1949.

The Magistrate’s House is the most treasured monument in Marbella’s old town. Its architectural style is late Mudejar gothic. As its name suggests, the building was the residence of the Magistrate. Today, it’s ground floor has a restaurant specializing in Mediterranean cuisine.

Marbella’s main historic landmark is a splendid renaissance and baroque church completed in the mid-18th century. The city wasn’t “re-conquered” from the Moors until the end of the 15th century, much later than almost everywhere else in Spain. This former mosque was sanctified straight away and became a Christian place of worship centuries before work was completed. So some of the building’s architecture has simply been adapted for Christian use.

Even the church’s tower was once a minaret. The interior floor plan was changed to a basilica layout, with three naves and opulent 18th-century rococo decoration.

The monuments and sites mentioned above are just a small sample of what you can find in the old town of Marbella, so this marvelous place is waiting for you.